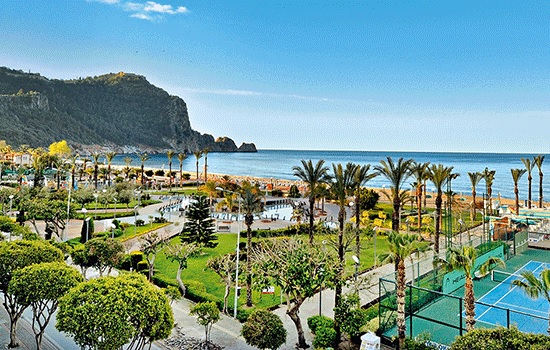 The main attractions of Alanya

Most of the historical and other interesting places are located within the city limits of Alanya, primarily in its central part. 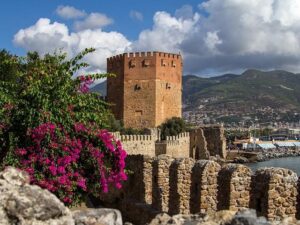 It was erected in the XIII century by the order of Sultan Ala ad-Din Key-Qubad at a 250-meter height of the rocky Cape Jilward.

Then this powerful impregnable structure of 83 towers and 140 bastions surrounded a triple ring of fortress walls with a length of more than 6 kilometers.

Today, only sections of the fence and the ruins of buildings remain of them. But the rich history of the world’s only surviving Seljuk fortress and stunning views from the observation deck deserve attention. 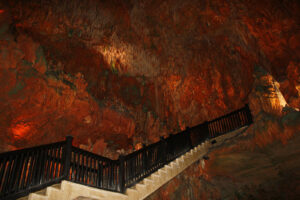 A miracle of nature amazing with its magical beauty, the cave with a thousand-year history was discovered quite by accident in 1948 and is equipped for visiting by tourists. 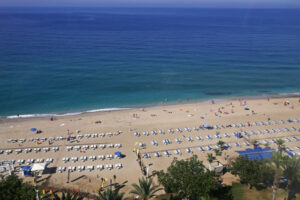 The most beautiful coastal strip with a length of 2 kilometers has been awarded the EU Blue Flag for the crystal clear waters and sand.

Today it is a resting place with excellent service, unique nature and optimal water and air temperature, where you can not only sunbathe and swim, but also do a lot of interesting activities. 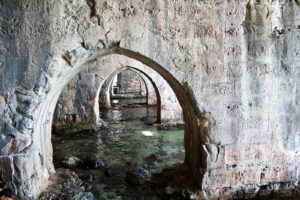 The dock, built in 1228 by order of the Sultan himself, brought him the name of “Ruler of the Two Seas.” Even before 1361, new ships were built and old ones were repaired in five arched aisles and 40-meter-deep galleries.

On the territory of the shipyard, many interesting historical objects have been preserved – an old mosque, a dry well, the sultan’s coat of arms on the front door.

In the evenings, special illumination gives the medieval buildings an absolutely fantastic look. 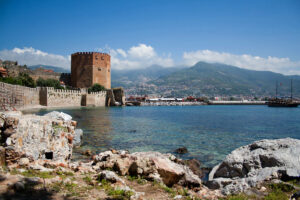 A reliable outpost of the city once bore the name of the Sultan Keykubat.

Built in 1226, the octagonal citadel with a diameter of 29 meters was called “red” because of the color of the building material.

An amazingly well-preserved monument of Seljuk architecture, today it proudly raises its 5 floors to a height of 33 meters, revealing a stunning view of the port.

A branch of the Ethnographic Museum is located on the lower floor of the tower. 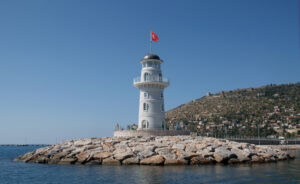 The history of not the oldest building in the resort is quite unusual.

Built in Paris in 1880, for more than half a century, it showed ships the way to the French coast.

Then the lighthouse was disassembled and delivered to Turkey, where it is on watch from

her day, being the decoration of the port harbor. Usually the light of the lighthouse at night is visible to sailors at a distance of more than 300 kilometers. 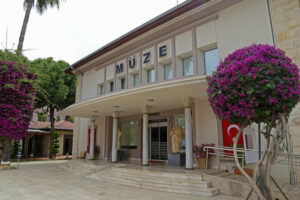 The institution has been revealing the secrets of history to visitors since 1967.

Here are the monuments of various historical periods – ancient Greek, ancient Roman, Byzantine. The museum is constantly growing and expanding its exposition. It has 14 internal halls and one external one – in the open air.

Among the exhibits are fragments of stone tombstones, collections of coins and weapons from different eras, household items, sculptures, vases, burial vessels, jewelry, carpets and even a part of an ancient building. 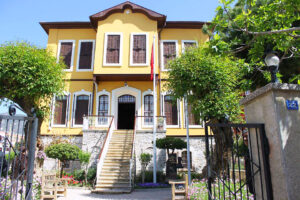 In a small mansion of the late 19th century, President Ataturk spent several days during his visit to Alanya in 1935.

This is a kind of ethnographic museum that allows you to better understand the time of the great Turkish reformer.

Here are his personal belongings – shoes, cutlery, photographs; and real objects of Turkish everyday life at the beginning of the XX century – furniture, dishes, clothes, carpets.

The green recreation area is located very close to the Cleopatra beach. A shady cool oasis (950 meters long and 450 meters wide) with palm trees, fountains and swing benches will warmly shelter you from the scorching sun.

For the experienced tourist who has already rested at the “Turkish dacha” more than once, there are many non-trivial attractions in Alanya and its environs.

Do you think that during your vacation you looked at Alanya from all sides? Believe me, you have not seen the city in all its glory if you have not met the sunset at the Seyir terasi observation deck. The city’s new Dinek Park is great for family outings, romantic dates, and wellness walks. And as soon as darkness falls on the coast, an unforgettable view of the city, strewn with colored lights, opens in front of you.

How to get there: take a taxi or bus number 8 to the Terasi stop and then walk to the top. 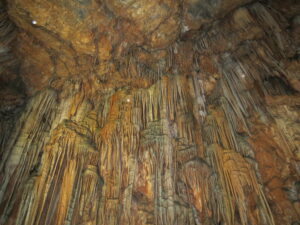 On a hot weekend, when tourists flood the beaches of Alanya, knowledgeable people go to rest in the picturesque valley of the Dim River. The stream originates in the Konya highlands and flows into the Mediterranean Sea. The second largest cave in Turkey (Dim Mağarası) is located here, and in 2008 the Dim Dam was erected.

A variety of cafes, restaurants and recreation areas are located right along the banks of a rather narrow, but mountain-like ice river, many literally in the water. It is here that you can escape the scorching sun and spend the whole day swimming, fishing, reading a book in the shade of awnings, drinking hot Turkish tea, which perfectly quenches your thirst.

How to get there: by taxi or by bus number 10, from the terminus of buses near the central bazaar of Alanya to the stop “Dim Chai Picnic”

In 2008, the Alanya municipal authorities set up a walking route through the Sapadere canyon. Amazing waterfalls on the Cerde River were opened to a wide range of the public. The water temperature in the places equipped for swimming is about + 12 ° C even in the heat of summer, and the air here is always cool and fresh. The mountain village of Sapadere has a traditional Turkish restaurant and several souvenir shops.

How to get there: as part of a jeep safari, excursion to the Sapadere canyon, by taxi or rented car.

In his “Geography” Strabo described the surroundings of the ancient city, located 12 km from Alanya, rich in cedar trees – they were used to build ships. To this day, from ancient Gamaxia, inhabited before the arrival of the Romans, the ruins of a tower, a fountain, a necropolis, an exedra and a temple to the god Hermes have been preserved. The entrance to the picturesque ruins is free, and an excellent panorama of the coast opens from the mountainside.

How to get there: by taxi or rented car. 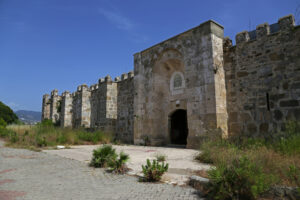 The construction of one of the caravanserais standing on the Great Silk Road lasted 10 years and was completed by 1246. For centuries, Sharapsa Khan, located 15 km from Alanya, served as a haven for traders and wanderers tired of a long journey.

Here the horses could be watered and their empty stomachs satisfied. Nowadays, the brainchild of Sultan Giyaseddin Keykhusrev has found a new life. The restored inn has become an entertainment center.

How to get there: from Konakli, walk along the D400 highway leading from Alanya to Antalya

According to legend, the Victorious himself guarded a long-disappeared mountain settlement 10 kilometers from Alanya. None of the robbers who ravaged the neighboring valley could set foot in Hydyrellez. A stream of stones suddenly appeared in front of the raiders, demolishing everything in its path. This horse of St. George, furiously stamping its hoof, split the rocks. Until 1922, solemn services of Orthodox Christians were held in the temple on the mountain. Now the temple has received the status of a monument of history and culture.

How to get there: by bus # 5 or 7 from the bus terminus near the Alanya Central Market to the “School” (okul) stop, then walk to the Hidir Ilyas sign, then walk along the only road for about 2–2.5 kilometers.

In which bank can I open an account in Turkey? To re-register Tapu, a mandatory procedure was introduced to exchange currency for lira at the cadastral value of the object. If you are planning to...
Read more
Alanya Information

Return on real estate in Alanya

One of the ways to save your capital in most countries of the world is to invest in real estate. Square meters are the resource that will always have a price and can generate a...
Read more
Alanya Information

The resort of Alanya is always full of life. Sunbathing, swimming, surfing, diving, rafting, sea fishing or shopping and souvenir shops, visiting the archaeological museum, strolling down the long pier to the lighthouse or having...
Read more